No Result
View All Result
Home US News

Gender Equity in Sports: A Worthy Fight in the US and Beyond By Ellie Roscher

by admin
in US News

On June 23, 1972, President Nixon signed the Education Amendments Act. Title IX recognized gender equity in education as a civil right and changed women’s sports forever. Almost fifty years after the birth of Title IX, and after six years of focused legal effort, the US Soccer Federation signed a landmark contract that guarantees equal pay for the men’s and women’s national soccer teams when competing in international tournaments and matches. 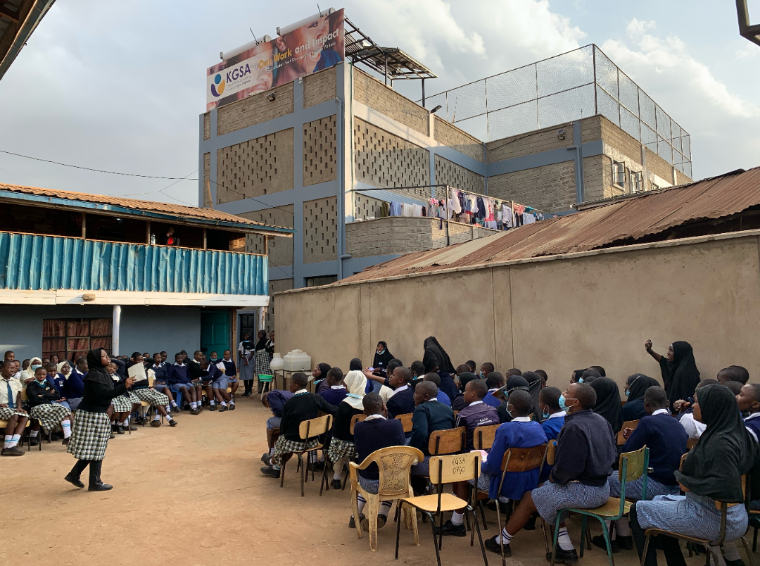 In May, when I saw images of the US women’s soccer team celebrating the historic win for gender equity, I sobbed. The victory felt relief in my body. As a two-sport college athlete, I have been working for gender equity in sports for decades. Every win matters. It makes me sad that we must fight so hard for equity, and yet it is a fight I know is worth it. 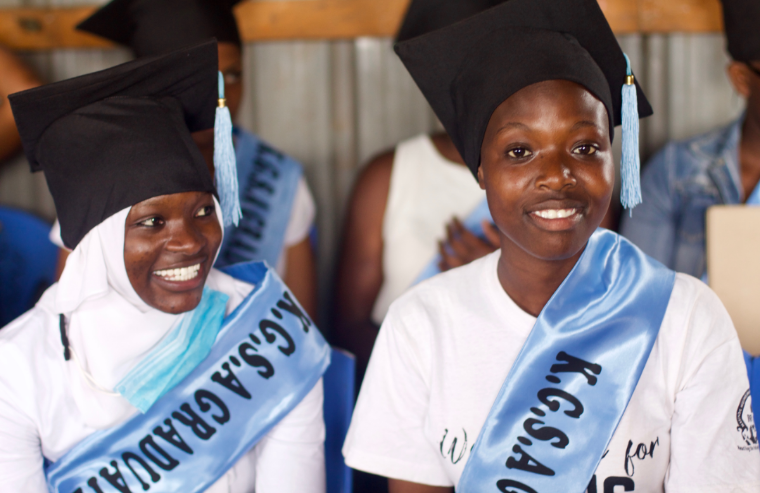 I cried similar tears the first time I heard the story of the Kibera Girls Soccer Academy, a free high school for girls in Kibera, Kenya – the largest informal settlement/slum in Africa. As a female athlete and educator, I knew that the success story of this girls’ soccer school was an essential part of the equity conversation. We all do better when girls do better, and equity in sports and school benefits the wider community in real, exciting ways. I traveled to Kenya in 2012 and 2013 to meet the soccer girls who started this successful school and write the book, Play Like a Girl. 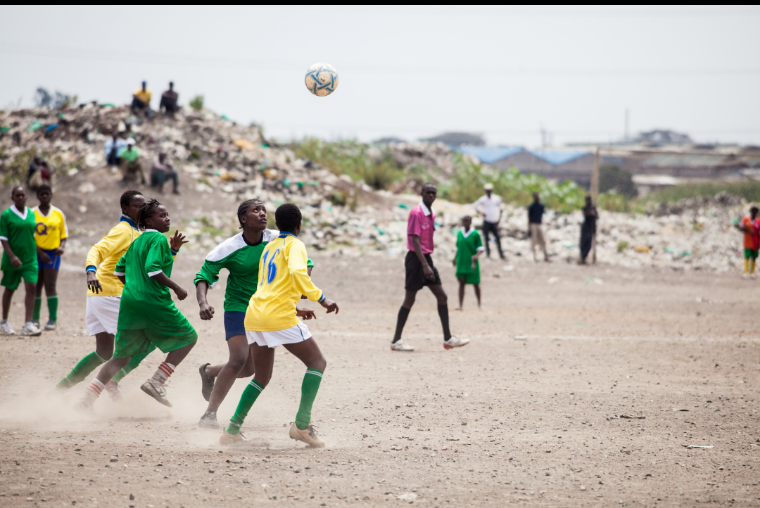 When Abdul Kassim was ten, his mom died, and he moved in with his grandmother. They lived in Kibera, outside of Nairobi, where folks make $1-$5 a day. Although she was illiterate, she believed education was the key to Abdul’s future. On the days school fees were due, she walked him to school to hand the tuition to the head of school herself, making sure he didn’t spend it on something else. It worked. Abdul graduated from primary, then secondary, and then college. He got a good job working for a phone company. In his spare time, he wanted to invest in his community of Kibera in a way that honored the strength and foresight of his grandmother. 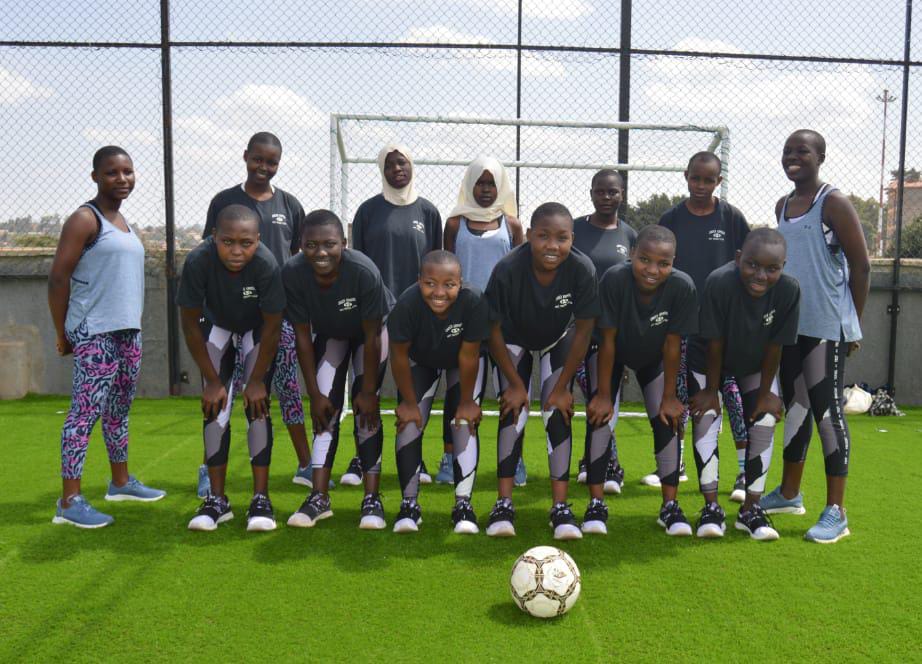 Abdul noticed that the boys in Kibera wouldn’t let the girls join them on the dirt and pebble soccer pitch. In Kibera, soccer was still very much a boy’s game. Abdul found girls in Kibera kicking around balls of paper and string with fire in their eyes. “I’m starting a girls’ soccer team in Kibera! Come play!”

In 2002, Abdul gathered a group of girls from different neighborhoods, tribes, and religions and trained them well. He talked their parents into letting them play. There were no girls to play, so they played the boys. At first, the boys beat them badly. But slowly by slowly, they improved and started believing in themselves. In a place where there is pressure for girls to do all the chores and marry early, to run, sweat and play felt revolutionary. Then came the day when the Kibera girls beat the boys. Abdul said on that day he could see the win in their bodies. They stood up taller. They realized they deserved everything the boys did.

As the girls got older, Abdul asked them what more he could do to support them. “We want to go to school,” they said without hesitation. Most of the girls had dropped out of school, unable to afford tuition.

Abdul opened an informal school for his soccer players in 2006 called the Kibera Girls Soccer Academy (KGSA). They met in the house of the assistant coach and used donated books from a friend. Within a few years, KGSA had 130 students and a beautiful two-story building, and were sending graduates to college. In 2011, two KGSA students made the Kenya Women’s Homeless World Cup team and traveled to Paris, France, where Kenya won the whole tournament. Rose kicked the game deciding goal in the championship game. Soccer remains a wonderful tool of empowerment, and KGSA also offers other sports and after school activities that support the girls in and after school. The groups and teams build a sense of belonging and strength in numbers. The strength of the student body originated in that first fierce soccer team.

Today KGSA provides a daily meal (lunch), sanitary pads, a school counselor, life skills clubs, mentorship opportunities, and even college scholarships for the top performing students. KGSA has graduated over 370 girls including 70 who have been able to pursue higher education. Under Armour recently donated soccer training gear, equipment, and game jerseys to the school soccer team and two anonymous donors funded a new AstroTurf soccer field on top of the dormitory.

The soccer girls in Kibera and then the students of KGSA have changed their community. They modeled freedom and agency in their bodies. They believed they were equal to boys and worked for equity at every turn. As we celebrate the anniversary of Title IX and the success of the US women’s national soccer team, may we all remember that gender equity in school and sports continues to be a worthy fight in the US and around the world.

You can hear more about KGSA’s powerful impact on Simonetta Lein’s online TV show that’s premiering its newest season this summer.  Simonetta has been recognized by Forbes Magazine as the number 5 “Most Influential Woman in the World” and a “wish-maker” who founded The Wishwall Foundation in 2015 to address issues of equality and to “give a voice to the voiceless.” After meeting the KGSA grads, Simonetta saw the impact that this small but mighty school had on the lives of its girls. She generously stepped in to sponsor and publicly follow one KGSA student through an entire school year to raise awareness about the importance of educating and empowering girls. You can follow Simonetta’s story and learn more about the Kibera Girls Soccer Academy and Simonetta’s Wishwall Foundation at www.kgsafoundation.org and  www.thewishwall.org.

Ellie Roscher is the author of The Embodied Path, 12 Tiny Things, Play Like a Girl and How Coffee Saved My Life. She teaches yoga at Up Yoga and teaches writing at The Loft Literary Center and the Minnesota Writing Project. Ellie holds an MFA in Writing from Sarah Lawrence College and an MA in Theology from Luther Seminary. Follow her at @ellieroscher and find out more at ellieroscher.com.

Stephen Colbert: Grateful for Grief - All There Is with Anderson Cooper

Twitter and the dangers of the US myth of free speech

Dornbusch thinks this strategy will spare patients from serious side...

Marvel finally ends the MCU's Civil War once and for...

Heading into “A Good Man,” the promo had us thinking...

And Just Like That… Season 2 Cast News Date Spoilers

The Sex and the City reboot series And Just Like...

Paramore have shared a statement addressing an apparent incident of...