Why Taylor Sheridan’s ‘Yellowstone’ Has Become Such a Phenomenon

Kevin Costner is starring in a TV Western! News broke on May 3, 2017, that the ruggedly handsome actor, no stranger to a Stetson, would play rich cattleman John Dutton in Yellowstone, an upcoming contemporary take on a distinctly American genre. The buzz in the heartland turned into a roar of approval. And no wonder: Costner had serious cred. He’d saddled up plenty onscreen, from his 1985 breakout film, the adventurous Western Silverado, to sensitive 1990 game-changer Dances With Wolves, which won him two Academy Awards. With this new project, what vision of the West would we get?

Turns out, one we’d never seen before. Yellowstone occupies a distinct spot carved out by cocreator Taylor Sheridan, who grew up in rural Texas. The actor turned writer-director was already critically lauded for his 2015 crime thriller Sicario and neo-Westerns Hell or High Water and Wind River. Sheridan has proven adept at capturing the friction at the borders between lands, cultures and people. No wonder the newly branded Paramount Network confidently gave him a straight-to-series order for its first scripted show, one that tantalizingly promised that the “wild” in the West wasn’t gone; it had just taken a new form.

“Yeehaw” was the approving response from folks eagerly gathered around their 65-inch campfires when Yellowstone premiered on June 20, 2018. John Dutton was an only-in-America hero: a sixth-generation owner of the largest contiguous ranch in the United States, Yellowstone, abutting the famous national park. The widower was rich and powerful, basically running the state of Montana from behind the scenes. He could ride, rope — and radio for his own helicopter. He lived in the dream home writ large: a log mansion under majestic mountains (the cinematically stunning series is part ode to this nation’s natural wonders and will make you hum “America the Beautiful”).

When you’ve got it that good, everybody wants a piece (really, the whole thing). To protect his family legacy, John developed a dark, violent side. He fights off business owners, developers and Native tribes. Chief Thomas Rainwater, played by Gil Birmingham, head of the fictional Broken Rock Reservation, is alternately friend and foe. There are gripping shoot-outs, car chases, kidnappings, sabotages, bombings, and stings. John’s three adult kids are his main backup, but the squabbling siblings are almost as likely to shoot each other as they are trespassers.

An instant fan favorite was John’s daughter, Beth (Kelly Reilly), a cigarette-smoking, booze-chugging, fearless financial whiz. Her soft spot: the only person equally loyal to her dad, ranch foreman Rip Wheeler (Cole Hauser), who, like the most devoted bunkhouse dwellers, is literally branded with a Y. Beth and her brother/sworn enemy, lawyer Jamie (Wes Bentley), have beaten each other up, but the most violent of the trio is Kayce (Luke Grimes), the golden child and a former Navy SEAL. (Longtime fans wonder why he’s never been caught for all his murders!) The backstory of the Dutton family dysfunction has been doled out over four seasons, making for shocking reveals that have delighted fans and added increasing depth to each character. But for all the bloody battles and family intrigue Yellowstone is also a joyful celebration of ranch and rural life, with huge doses of authenticity. Real cowboys are part of the cast and real rodeo stars jangle spurs in the corral. The series shoots on a real reservation and ranch in Montana. The people from Yellowstone live in our world.

All this has created a thriving fandom. YouTube videos break down the episodes and get hundreds of thousands of views. Do an internet search for “Beth Dutton fashion” and you’ll find pages of listings hawking clones of her outfits. Want your own Yellowstone T-shirt, hat, hoodie? You’re covered. As one Amazon reviewer said, when you wear the Y-branded gear, you’re greeted by fellow fans and “find your tribe.”

Clearly, Yellowstone has tapped into something. As Sheridan has said, “It’s a massive theme, this fear of losing someone that you love or a place that you love. That’s pretty universal.”

And we can’t get enough of the Dutton struggle. The ratings are unheard of in today’s fractured viewing landscape. The most recent season finale’s ratings hit a new high of 9.3 million viewers. Plus, the saga has spawned three spinoffs (so far). Two are prequels: 1883, about the first Duttons heading west by wagon train, debuted in 2021 as the most watched series premiere on cable since 2015. And 1932 will pick up in the Depression. Set in the same time period as Yellowstone is another drama still in development: 6666 (“The Four Sixes”), set on a real Texas ranch.

Of course America can’t wait for more home-sweet-dysfunctional-home on the range. Maybe because the Dutton family digs in when the wild ride of life tries to buck them off — and inspires all of us to hang on too.

This is an excerpt from TV Guide Magazine’s Yellowstone Special Collector’s Issue, which is available nationwide on newsstands now. 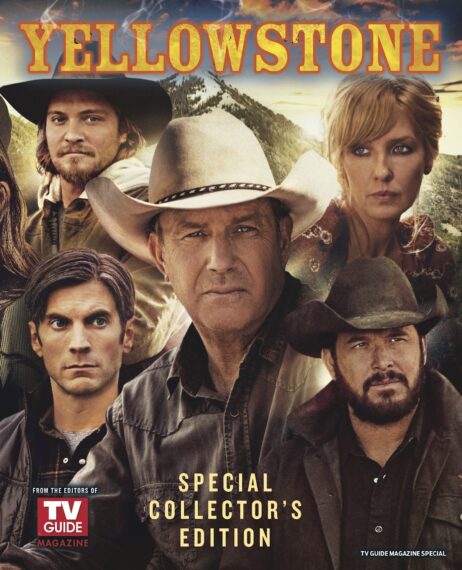 WHAT WAS THE TURNING POINT OF THE CIVIL WAR?

US Air Force Successfully Recovers Hypersonic Sled Traveling at 6,400 Feet Per Second on a Monorail