Zac went to bat for Fatima on Wednesday’s Sistas, though no actual bats were involved this time. Not yet, anyway.

Because Andi agreed not to tell Zac about Fatima’s arrest, she kept quiet when he showed up to their office demanding answers. Hayden, on the other hand, took no such oath — and he couldn’t wait to tell Zac about Fatima being in custody. He even crafted a jaunty little song to hammer the point home. “I locked your bitch up,” he taunted to the tune of “Ring Around the Rosy.” (I said it was jaunty, I never said it was clever.)

Zac played right into that weasel’s grubby little paws, attacking him in the middle of a crowded office, surrounded by witnesses. There’s no way Zac won’t have to pay for this, and I’m starting to wonder if Andi will stick to her “If they fire Fatima, I walk” plan. It’s not the smart move at this point, if it ever was.

Speaking of Fatima, while she has yet to show any remorse for trashing Hayden’s house (and desecrating his father’s remains!), she does regret getting involved with him in the first place: “I slept with him one time, and I was drunk as s-t! I took one look at his little [thing] and said, ‘Damn, I hope I don’t fall asleep.’” For her, that’s progress.

Elsewhere in the Sista-verse this week… 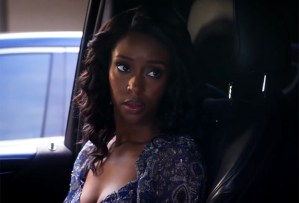 * When it comes to Karen’s baby, Aaron… You are… not the father. Or maybe you are! Honestly, we’ll probably never know. At the rate this story is progressing, we’ll be lucky if our grandchildren someday learn who the father is. “According to the timeline, it could be yours or Zac’s,” Karen revealed, which really isn’t that helpful. I also loved when Aaron was surprised to hear that he isn’t giving Karen enough space. I know he wants to do right by the potential mother of his child, but this guy might as well be hovering over Karen making helicopter noises. (Side note: I laughed when Danni told Zac, “Andi’s about to have your baby.” Last time I checked, eight years from now doesn’t qualify as “about to.”)

* Preston has never been a sparkling conversationalist (cows, am I right?), but he truly outdid himself this week, calling Danni to ask for some of the things he left at her place. Which things, you ask? Why, “some boots and some jeans,” of course, because what else does this man even own? When it became clear that he only really called to casually mention that he’s seeing someone, Danni went straight to Zac — presumably the source of Preston’s terrible life advice — to have a word. Several words, actually. She admitted to having feelings for Preston, but she can’t get past their lack of common interests, so she basically just agreed to keep playing games with him. And then Zac mentioned butt-licking, because apparently this show has a quota to meet for that.

* In keeping with this episode’s theme of no one doing anyone any favors, Maurice came home to find that Calvin had invited Que inside. “Your man was down on the steps starving, so I let him in,” Calvin explained, which made sense considering he recently referred to Que as a stray cat. Sure, Maurice was glad to see that Que whipped up his favorite meal, but did he need to serve it with a side of childhood trauma? Obviously I sympathize with Que being molested by his mother’s boyfriend growing up, but did this show really need to give him that backstory? Must we redeem the guy who robbed Maurice at gunpoint?

Are you starting to worry that Hayden is going to win his war with #Zatima? How long do you think we’ll have to wait to find out the father of Karen’s baby? And are you hoping for a happily-ever-after with Maurice and Que? (If your answer to that last one is “yes,” prepare to defend yourself!) Drop a comment with your thoughts below.

THE COMEDIANS IN CARS GETTING COFFEE BOOK

UK was worst in Europe for heat pump installations in 2021

15 Things You Didn’t Know About The Rebel Alliance

Unfinished Facility In Afghanistan Led To $103 Million Of Waste