This week’s Riverdale featured songs from American Psycho… and it ended with the demise of an American psycho, too.

Season 6’s musical episode centered on a serial killer fan convention thrown by Betty to lure out the elusive Trash Bag Killer. It worked, with TBK taunting “Pretty Betty” during a panel before tying up Alice and Charles in the Cooper house and setting up a candlelit dinner for Betty in the garage. Betty pointed a gun — her father’s gun, for the record — at the killer and demanded he take off his mask, but TBK only wanted to dismember Alice and Charles with her, declaring, “We’re soulmates.” Betty stood firm, though (“I’m nothing like you”), and shot the guy dead, finally bringing an end to his reign of terror.

TBK’s arrival did stir up a lot of feelings in Betty, and she almost pushed Archie away when she felt her dark side creeping in. (Plus, Agent Drake revealed out of the blue that she’s attracted to Betty, which Betty politely declined… but she still had a dream about her, we noticed.) It was an eventful hour, so we turned to Riverdale showrunner Roberto Aguirre-Sacasa to tell us what this means for Betty and Archie’s relationship moving forward, what the deal is with Agent Drake and if Cheryl has found true love with Heather. Plus, the EP teases “a very big swing” in the finale that sets up Riverdale‘s final season.

TVLINE | So Betty killed the Trash Bag Killer and closed that chapter. But we never got to see him unmasked!
We talked about this in the room a lot. We talked about that last scene with TBK and Betty, and if TBK should wear his mask. Ultimately, we felt like that’s the truest representation of who TBK is and what he represents for Betty. So it was very conscious to not reveal his face there. But remember, we did see it when he was working construction for Archie. 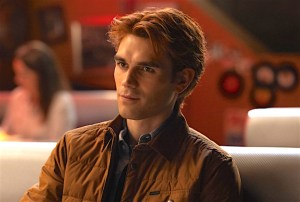 TVLINE | The encounter with TBK led Betty to almost push Archie away, but he stayed by her side, and they recommitted to their relationship. Are they still on shaky ground, though, because of these doubts Betty is having about her dark side?
I would say that they are on the most solid ground that they’ve ever been. It’s funny to say in a musical episode, but my favorite scene is that last scene with KJ [Apa] and Lili [Reinhart]. They play it so beautifully, and I feel like they come to such a great, great place. They are on solid ground. I don’t think this is the end of Betty dealing with all of her emotional and psychological trauma and anxiety and fear about who she was groomed to be by her father and how she was gaslit by Alice. But in terms of her relationship with Archie, I think she is allowing that to thrive and not second-guessing it as much. That’s one of my favorite aspects of the episode, and I love that Veronica is the one who helped her through that.

TVLINE | Agent Drake confessed that she’s attracted to Betty, and it seems like Betty was considering it on some level, even if just subconsciously. Is that door completely closed?
We haven’t seen the last of Agent Drake, but we’re very protective of Betty and Archie. We love the weird, wild curveball complication of Agent Drake saying, “I’m attracted to you.” We certainly didn’t want to compromise or create drama where there was no drama to create. But that felt real, in terms of, “I don’t have to worry about my darkness with [Drake] the way I do with Archie.” Even if Betty wouldn’t entertain it seriously, it would resonate with Betty. We were sort of trying to thread the needle on that. Even when I talked to Lili about this storyline, Lili said very wisely, and we agreed: “I don’t want to cheat on Archie.” And I’m like, “No, no, no, no, no.” But that’s not going to stop someone from flirting with you or being attracted to you. That does happen. And undeniably, there have been sparks between Betty and Agent Drake, weirdly. So it felt right to us. 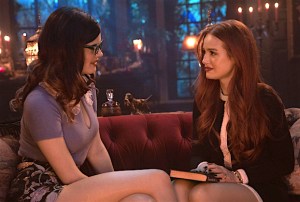 TVLINE | Cheryl was thrown by Toni and Fangs’ engagement, but she bounced back with Heather, and they took the next step. Is this the start of something real for Cheryl?
Yeah, it’s certainly an emotional opening-up that she hasn’t allowed herself to have in a while. In a weird way, Cheryl’s story sort of echoes Betty’s story, in that they’ve been holding back a little bit and not fully allowing their emotions to lead, for fear of being hurt or hurting someone. So I do think this episode is a growing-up moment, or sort of taking stock of where she’s at and being real with herself. 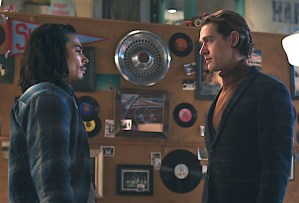 TVLINE | Percival is gearing up to take this “truly Biblical” revenge on Archie and the gang, but I noticed when he tried to control the minds of all those construction workers, his nose started bleeding a little. Are we seeing a weakness in Percival?
Yeah, we’re just seeing more of his abilities and the limits of his abilities. But let me promise you: He’s going to get more powerful and not weaker as we head towards the finale. We have [five episodes] to go, and they’re doozies! The next one is maybe my favorite of the season so far.

TVLINE | Jughead is still in the bunker hearing voices, so we didn’t see him much this week. He will emerge before the season ends, though, right?
Oh, absolutely! We start a very, very big storyline with Jughead in the next episode.

TVLINE | We now know that next season will be the final season. How did that decision come about, and what do you have planned for Riverdale‘s final run?
It came out of conversations with the studio and The CW and [CEO] Mark Pedowitz. When we were renewed for Season 7, though we weren’t told at the time it’d be our final season, I think we were all feeling that it might be. When Mark and I talked about it… it was bittersweet. That said, we are so proud of the run we’ve had, and the call did come as we were working on the last episode of Season 6. We were debating on what the final beats of that episode would be and torn between a very big swing and a quieter ending. And it definitely emboldened us to go for the big swing for Season 7. It’s really exciting.

Riverdale fans, grab a booth in the comments and give us your thoughts on this week’s musical episode and predictions for what’s next.

Pleasure review – a candid insight into the sex industry

Pleasure review – a candid insight into the sex industry

THAT SUMMER NIGHT ON FRENCHMEN STREET

Stock picks to navigate a recession