The actress, who left midway through Season 11 to welcome the arrival of her second child, has returned to the BBC One/PBS medical drama for both the Call the Midwife Holiday Special and Season 12. The show posted photos of her recent return on social media.

The holiday special will of course air on Christmas Day, while the newest season will be set in 1968 and premiere in the UK and then the United States, months apart, in 2023.

The last time the fan-favorite character was on the show, the midwife had taken a leave of absence to care for her dying godmother in Italy. Unfortunately, this was around the same time that Trixie and widower Matthew Aylward (played by The Spanish Princess‘ Olly Rix) had started dating and growing closer. (The two even shared a kiss.) Now that Trixie has returned, perhaps those who happily ‘shipped them will get to see their love blossom and lead to something more serious.

George’s homecoming isn’t the only return viewers can rejoice over. Another photo features Stephen McGann, who stars as Dr. Patrick Turner, happily holding a baby. This means Dr. Turner’s arm injury from the Season 11 finale has healed, and the COVID protocols that had restricted the Call the Midwife cast from having close contact with infant actors has lifted, producers confirmed. 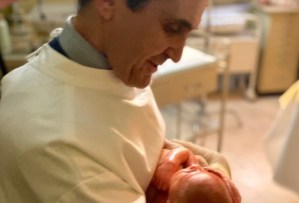 “This was a real challenge for a birth drama like ours, but one we faced, like others, as a medical necessity,” the show explained on Facebook and Instagram. “For two years we’ve had to radically change the way we filmed births — and our cast had to adjust technically to the greater distances involved. So, when we finally had our first birth scene to film in this episode, Stephen took the opportunity to meet his first young star in two years.”

Are you excited about Trixie’s comeback and the return of more births and babies on Call the Midwife? Drop your thoughts in the comments.

Britney Spears Says She Had A Miscarriage

The Pennsylvania US Senate race appears to have been a...

A Pittsburgh restaurant owner blamed COVID Wednesday after he was...

Startups and VCs are increasingly embracing the federal government. Here’s why

On paper, the federal government looks like an ideal customer...

The FCC’s Rules on Space Junk Just Got Stricter

There’s an international element to the debate, too, as the...

Today’s edition of Romance Daily Deals is sponsored by  Amazon...

How Big Is Vhagar Compared To Balerion & Drogon?

Warning! This article contains spoilers for House of the Dragon.House...