Wendy Stuart and Steven Bloomer-Teague will be hosting TriVersity Talk this Wednesday at 7 PM ET in a replay with featured guest Michael Iannucci. This episode is part of The Best Of TriVersity Talk series that takes place on the first Wednesday of each month.

TriVersity Talk! is a weekly web series with featured guests discussing their lives, activism and pressing issues in the LGBTQ Community. With TriVersity Talk!, the goal is to laugh and learn. 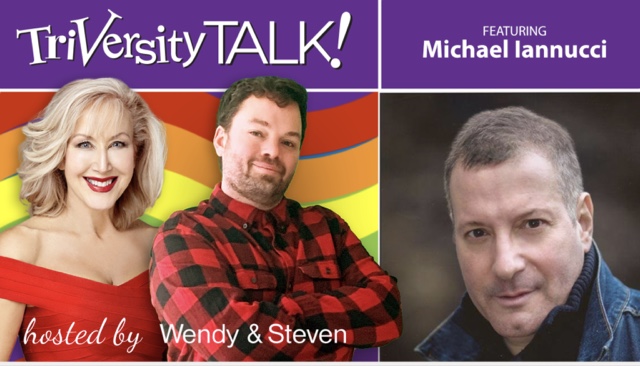 Originally from Philadelphia, Michael Iannucci studied theatre at Temple University and the Royal Academy of Dramatic Arts in London. Theatre credits: Broadway: FIDDLER ON THE ROOF. Off Broadway: SHLEMIEL THE FIRST (Theatre for a New Audience); ENTER LAUGHING (York Theatre); STREET SCENE (Brave New World Rep). He toured nationally in ANNIE and FIDDLER ON THE ROOF. Regional: BEAUTY AND THE BEAST; AN ACT OF GOD; VERONICA’S ROOM; AND THEN THERE WERE NONE (Fulton Theatre); BRIGHTON BEACH MEMOIRS (Seven Angels); STEEL PIER (Actor’s Playhouse); A CHRISTMAS CAROL (White Heron Theatre); THE MOST HAPPY FELLA; CATS (Theatre Under the Stars); FALSETTOLAND (Carbonell Award nomination); BYE BYE BIRDIE (Westchester Broadway). Stock: CHICAGO (Mason Street Warehouse); GUYS & DOLLS (New Harmony); TREASURE ISLAND (Maine State Music Theatre); LEND ME A TENOR, SPAMALOT (Arrow Rock Lyceum); INTO THE WOODS, TO KILL A MOCKINGBIRD (Forestburgh Playhouse); SIX DANCE LESSONS IN SIX WEEKS (Ivoryton Playhouse). Television: ELEMENTARY. He was a founding member of the New York Theatre company PROJECT RUSHMORE. A blog writer his blogs can be found on his website https://www.michaeliannucciactor.com. He is married to Rabbi Frank Tamburello and when not in New York City or out of town on an acting gig they spend time at their apartment in Milford, PA.

The official website for The TriVersity Center may be found at https://www.triversitycenter.org

How to reserve the new Samsung Galaxy devices

A Mostly Persuasive Primer on Sex Scenes – The Hollywood Reporter