The following recap spoils the premiere — but only the premiere! — of Love, Victor‘s third and final season, which dropped in full on Wednesday.

Thank goodness there was nice weather on the evening of Mia’s dad’s wedding, because Victor has been on his mystery man’s doorstep for a long time.

About a year after its sophomore season concluded, leaving us to wonder whether its title character had chosen Benji or Rahim, Love, Victor returned for a third and final batch of episodes on Wednesday — and, as the Season 3 trailer strongly suggested, Victor has picked Benji as his one and only. When Benji opens the door, Victor explains that he couldn’t let the night end with Benji thinking that Victor had moved on, and he recalls the first time he ever laid eyes on Benji at Creekwood High.

“At that moment, I realized this lie that I’ve been telling myself my whole life just went up in smoke,” Victor says. “You changed my life. I love you, Benji. It’s always been you.” Benji says he loves Victor, too, and Victor takes him to the same bench at school where they shared their (real) first kiss during the Spring Fling dance. There, Victor asks if they can start over, explaining that although there was something more than friendship with Rahim for a minute there, Victor’s “not confused now. I swear.” There are apologies exchanged, kisses shared, and as Benji sadly observes that he and Victor “wasted so much time,” it seems like these two are finally on the right track.

Well, for a minute, anyway! As it tends to be on this show, Victor and Benji’s happiness is short-lived. They continue on their romantic, post-reunion drive for a while, but Benji is freaked to see a sobriety checkpoint up ahead, revealing that he’d had a few drinks earlier in the night before Victor arrived. Victor’s quite chill about the whole thing, really: He swaps seats with Benji before any cops see them, and the checkpoint goes smoothly; later that night, when Benji’s dad asks why Victor has the car keys in his pocket, when Benji was the one to initially snag them, Victor lies that he just wanted to experience driving a Range Rover for the first time, and Benji’s dad buys it.

But the lie doesn’t sit well with Benji, who asks Victor to leave so he can be honest with his parents about what happened. And when Victor visits Benji the next day, having gotten radio silence from Benji via text, Benji reveals that he’s going away for a three-week, in-patient rehab program, which he believes will be good for him; the previous night wasn’t the only time Benji fell off the wagon in the past year, and putting Victor in danger by driving under the influence the night before appears to have been Benji’s breaking point.

“If you and I are going to have any real chance of working out, then I have to figure this out, and I have to do it alone,” Benji tells Victor, adding that Victor can tell “anyone you really trust” about Benji’s real whereabouts for the next three weeks. As for what awaits Benji and Victor’s relationship after this hiatus? “I’m not sure,” Benji admits, and Victor watches solemnly as Benji and his dad pack up to leave.

On the bright side, some other couples had more luck during Wednesday’s premiere; here are the highlights:

FELIX & PILAR | Victor’s best friend and younger sister are Officially A Thing, but Pilar is reluctant to reveal the new relationship to her parents; she even tells her mom, while Felix is sitting right there, that “there’s nobody” special in her life at the moment. Damn, girl. Ice cold. But when Felix later seeks some advice from Victor on the subject, Victor shares that his parents — especially his dad — are quite protective of Pilar, and she might just not want to expose Felix to that just yet.

Pilar confirms Victor’s hunch the next day, insisting to Felix that it’s “humiliating” to have such a protective father. Felix has only ever known her as Victor’s little sister, and she doesn’t want him to view her as a little kid. In Felix’s eyes, though, Pilar is a “super-smart, badass, model-gorgeous neighbor whose father would murder me if he knew the thoughts running through my head right now” — and Pilar doesn’t hate the sound of that. 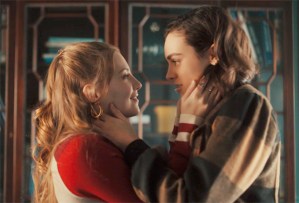 LAKE & LUCY | Otherwise known as The ‘Ship We’re All Really Here For, Lake and Lucy get their romance off to a sweet, if slightly bumpy, start. They hang out for a long time after Mia’s dad’s wedding, and the conversation eventually gets very complimentary about each other’s looks… but when Lucy starts to lean in for a kiss, Lake backs away, lying that she thought she heard her phone buzzing.

When Lucy stops by the next day to return a sweatshirt of Lake’s that she’d borrowed the previous night, Lake apologizes for killing the vibe. “I think I just got scared,” Lake says. “Not because I didn’t want it to happen, but because I did.” Lucy seems happily stunned by that revelation, and Lake finally goes in for the kiss. (Judging by Lucy’s reaction — “Holy s—t!” — it’s a great one.)

MIA & ANDREW | After a long drive, Mia and Andrew reach the address that’s been listed for her mom as of late, and they quickly spot her among the crowd that’s there for a house party of some sort. Mia’s mother is all kinds of emotional over their reunion, which Andrew doesn’t really get: If this woman is so proud of Mia and wishes she could be there to see her life milestones… then why doesn’t she ever show up?

“I’d be wary of me, too,” Mia’s mom confesses later, when Mia apologizes for Andrew’s brutal honesty. She also explains why she left Mia and her dad years ago, sharing that “I was losing myself in that house” when Mia’s father refused to ever support her artistic ambitions. But she’s all too aware that bailing on Mia was “selfish and horrible and the worst thing I have ever done.” And juuust when it seems like some common ground has been found, and Mia’s mom insists she’d do anything to have Mia in her life again, Mia suggests that she move to Creekwood, which would allow the women to repair their relationship while ensuring Mia doesn’t have to move across the country with her dad. Mia’s mom likes the idea… but she’s about to go to Prague for several months for an art residency, and Mia is immediately crestfallen. “This was a mistake,” Mia says before leaving — and when she returns home the next morning, she interrupts her dad’s apology with a long, tearful hug.

RAHIM &… TBD! | And finally, there’s poor Rahim, who’s left to look longingly out his window, hoping that Victor will show up at his door after the wedding. (He even prays on it, at his mom’s suggestion.) The next morning, Rahim’s mother can sense how disappointed he is, and she tells him, “I know it may not feel this way right now, but I believe God has a plan for you, and that plan includes someone who will love you with all his heart. So it is written.” “It is written,” Rahim agrees.

Your turn! What did you think of Love, Victor‘s final season premiere? (And we’re only talking the premiere at the moment, to keep everyone unspoiled.) Grade Episode 1 in our poll below, then drop a comment to back up your choice!

The Best Dinosaur Video Games Of All Time, Ranked

The Best Dinosaur Video Games Of All Time, Ranked

Hispanic journalist group scolds Jill Biden for ‘breakfast tacos’ remark: ‘Do not reduce us to stereotypes’

Here’s What We Know about Stuttering