This Thursday on Law & Order (NBC, 8/7c), Jalen Shaw (played by Mehcad Brooks) finds himself in a moral dilemma.

The lawyer-turned-detective must contend with getting a false confession from an innocent Black man, ultimately failing to do what he set out to when he became a cop.

“Shaw went into law and became a homicide detective not only to put away bad guys, but to make sure that innocent Black men didn’t end up in prison on his watch,” Brooks explains to TVLine. “He wanted to fight this system, and he realizes that he’s become a guardian of that system, rather than this disrupter. And so there’s a spiritual battle that he has of perhaps letting down the people who look like him.”

This week’s fall finale centers on a young man’s journey from waiting at Rikers Island — a notoriously brutal and deadly prison complex — for his day in court to a man on the run after escaping. The case draws similarities to harrowing real-life examples like Kalief Browder, who at 16 years old was held at Rikers for three years while awaiting trial because he couldn’t afford the $3,000 bail. 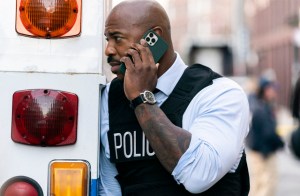 “My mind went to him. My mind went to thousands of others who’ve been put in that position,” Brooks says. “Law & Order [is] an institution that is able to infiltrate the living rooms of a multitude of diverse Americans. I think that we’re able to at least shed light on conversations that need to be had, and this is a conversation that needs to be had: that the system exists, and that we have to start looking at people’s lived experiences as true.”

By starring in the Dick Wolf procedural, the actor hopes to “spark the change or affect the conversation in recruitment where there are more police officers who are inspired by people who are acting and conducting themselves like Jalen Shaw.”

Acknowledging that Law & Order has been influential in how people view cops and the way that the criminal justice system operates, Brooks has made it a point to not depict the use of excessive force with his character.

“I have been the subject of police brutality before in my life, so I know how it feels,” he shares. “I don’t want to inflict that on a character or glorify that on the show.” For that reason, you don’t see Shaw throwing suspects around or violently slamming them to the ground.

“I don’t look at that as, ‘Oh, this is something we can do as actors.’ I don’t think the writers’ room sees it that way. They don’t write it that way, either,” he notes. For Brooks, those instances of police brutality are “factory settings in America,” and he’s “fighting against the factory settings” as Shaw.

“It’s more like, ‘How can I add grace to these arrests? How can I treat this human being like they’re somebody who deserves respect whether they’re a suspect or not?’” he adds. “I think that I’m in a very unique position. I understand how impactful [it] can be. I’m thinking very seriously about where we need to go as a country and that relationship between the Black community and over-policing.”

How Water Made Fire in an Indonesian Volcano

Sen. Dianne Feinstein Flips On The Filibuster And Demands Abortion Rights Be Protected