Chicago P.D.’s Upton and Halstead are still going strong after that emotionally-charged finale (read our full recap here) but the same can’t be said for Atwater and Celeste, who broke up earlier this season.

The April 22 episode “Fool’s Gold” found Atwater reaching out to Celeste one last time to make amends for what went down during their short-lived romance.

As you’ll recall, the pair met at a bar, hooked up and began dating. Since Celeste was a social activist who was critical of police, Atwater lied about his job and continued to see her while pretending to be a regular citizen. When she finally found out, she was more hurt that he lied to her than him being a cop, and their relationship ended. Celeste has been ignoring Atwater’s calls since then. 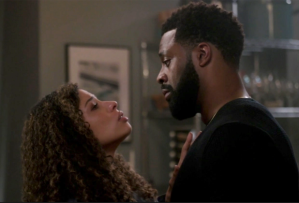 In “Fool’s Gold,” he left a final, heartfelt apology on her voicemail and resolved to never bother her again. Given everything that happened so far, LaRoyce Hawkins, who plays Atwater, says the Intelligence cop will surely learn from his mistakes.

“Atwater definitely needs love, but he’s also not wanting to force anything. You can’t force a vibe. If it was meant to be, it will be,” he tells TVLine. “If [Celeste] has a hard time understanding his intentions behind why he couldn’t be as vulnerable with her as she probably would like for him to be, he has to take that and keep growing from it… When we find Atwater in his next situation, as we watch him play the field moving forward, he’ll be a lot more vulnerable.”

So where does this leave them? Can we expect to see Celeste back on the show or are they done for good?

“It might be,” Hawkins notes. “I can’t say whether we’ll see her again. I would love to see her again, but I’m not sure. I’m looking forward to whatever happens.”

Regardless of what happens between them, the actor says that “Celeste will always be a big part of Atwater. We’ll see her in the decisions that he makes moving forward. She’s going to have a hold on him a little bit.”

Where Was Season 4 of Stranger Things Filmed?

All Rise Season 3 Episode 6 Review: I’ll Be There

The Best LGBTQ Books of the Year, According to Lambda Literary

Cancer death rates among Black people declined over time, but remain higher than other groups

Irish Government to Criminalize Hate Speech, Effectively Silencing Those who Hold Different Opinions- Penalty is up to 5 Years Imprisonment

Irish Government to Criminalize Hate Speech, Effectively Silencing Those who...