Barry wrapped up its third season on HBO with a truly pulse-pounding finale… but it came with a bleak ending for the title character.

We pick up with Barry still on Purgatory Beach, where he’s now joined by Gene and Sally… and he wakes up in a hospital bed. He rushes back to his apartment, where Sally is waiting for him. She remembers how he offered to mentally torment the BanShe executive: “I need you to do that to Natalie.” She wants Barry to break into her house and take photos of her while she’s sleeping, but Barry says no: “I know where I’m going after all this. After I die… and I don’t want you to go to the same place.” They’re interrupted, though, by a tough guy who punches Barry out and then strangles Sally to the verge of death… before she sticks him in the neck with a steak knife. When Barry finally comes to, Sally is beating the guy to a pulp with a baseball bat. He stops her and gets her to say “Barry did this” before sending her home. 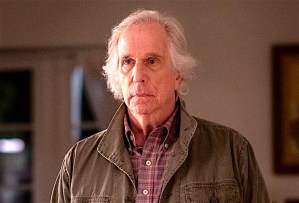 Meanwhile, Gene is fielding new job offers when he gets a call from Janice’s dad Jim Moss, who asks Gene to come meet him. In his garage, Jim has two chairs set up, and he puts his interrogation skills to work questioning Gene about Janice. Gene says he loved Janice, but Jim then asks: “Do you love Barry Berkman?” Gene says no, but Jim gets up in his face and screams at him, asking why he’s protecting Barry. Gene finally breaks down in gasping sobs. (At the police station, Fuches claims he doesn’t recognize the Chechen pin left at last season’s shootout and gets thrown in the slammer.)

Oh, and we didn’t forget about Noho Hank: He’s still handcuffed in a Bolivian jail cell, and the guy next door says he got out of his handcuffs… but then a guard arrives, and Hank hears a scuffle, followed by horrible screaming and what sounds like a tiger (!) tearing the guy apart. Soon, the animal is punching a hole through to Hank’s wall, and he frantically yanks on his handcuffs until they break, overpowers a guard and uses his huge gun to fire a hail of bullets into the next cell. (Aw, we didn’t even get to see if it was a tiger or not.) Hank emerges with the gun and makes his way to another room, where Cristobal is being electrocuted by his wife while he looks at a sexy man dancing, presumably to cure him of his homosexuality. Hank shoots the wife and the dancer and pulls a dazed Cristobal into a tight embrace — but Hank still looks troubled. 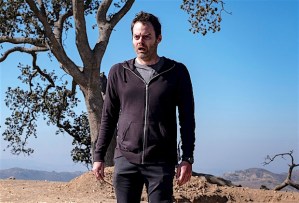 Barry is back on that desolate mountaintop from the season premiere, burying the attacker’s dead body in a shallow grave when he’s stopped by Albert. The cop wants to know how much he got paid to kill this one… and to kill Chris. Barry falls to his knees, shuddering, and when Albert pulls his pistol, Barry screams and cowers, covering his head. Albert softens and credits Barry with saving his life: “I know evil, Barry. You’re not evil.” He does tells him, though, that this all has to stop, “starting now,” before he walks away.

Barry calls Sally from his car, making plans for them to drive off together — but he doesn’t know she’s catching a flight to her hometown of Joplin. He gets a call from Jim Moss, wanting to talk about Janice’s death. Barry makes an excuse and then calls Gene, who sounds desperate: “He’s gonna ruin me. I can’t have that.” He has a gun, too. Barry speeds there and finds Gene in the street, screaming at him for holding a gun. Barry says he’ll just go in and talk to Jim, but Gene warns him: “He knows everything, Barry.” Barry sneaks inside Jim’s house with Gene’s gun in hand and points it at Jim’s head when we hear: “Drop the f–king gun.” Suddenly, a dozen cops with big guns and body armor close in on Barry, taking him in to custody — and Gene stands there, staring into Barry’s eyes as he’s led away. (He set him up!)

Now it’s your turn: Give the Barry finale a grade in our poll, and hit the comments to share your thoughts.

REI Gear Up Get Out Sale: Deals from the Black Friday alternative