THE SHOW | Hulu’s The Handmaid’s Tale

THE PERFORMANCE | An Aunt Lydia who has reached the end of her emotional tether is an amazing Aunt Lydia  — and one we don’t often see. So we were riveted when the relentless matron thought her favorite handmaid was about to die in this week’s episode. Dowd went for it and turned in one of her rawest performances so far in the series’ six-season run. We’re still thinking about it.

The Emmy-winning actress had Lydia’s anguish written all over her face from the moment she entered Janine’s hospital room. When she gave voice to her grief, naturally it took the form of a rambling prayer. Dowd put real desperation into Lydia’s begging for Janine’s survival, her words frequently getting caught in her throat as profound sadness and fear choked her. As Lydia bargained with The Man Upstairs, Dowd cried in that all-out, painful, makes-your-face-hot way that signifies someone at their very limit. Goodness, we can’t imagine what it took to get there. And goodness, we were captivated by every second.

Against all odds, and after six cattle-prod-filled years, it seems like Aunt Lydia is approaching an epic crisis of conscience. And if Dowd’s performance in this week’s episode is any indicator of the emotional reckoning ahead (and maybe a series order for the Testaments sequel)? Praise be!

HONORABLE MENTION | From the moment Bix Caleen slid out from under the turbine she was tinkering with to see what Cassian Andor wanted from her this time, Adria Arjona created a specific character within the Star Wars universe. Arjona imbued Bix with lotsa grit — you instantly bought her as a scrappy mechanic not averse to making an illicit buck — and yet you also saw the (semi-)soft spot she has for Cass, that she agreed to hook him up with her “secret friend.” Bix was a very cool cucumber, but Arjona’s best work came in Episode 3, when Bix learned that corpos were on Ferrix to hunt Cass… and that coworker-with-benefits Timm had tipped off the fuzz. As that realization crystalized, a ferocity washed over Arjona’s face, mixed with disgust. And yet Bix retained enough fondness for Timm to later bawl when he was shot dead in front of her, trying to right a wrong. 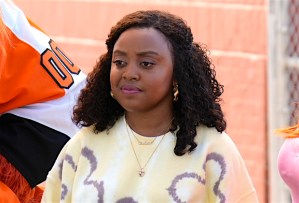 HONORABLE MENTION | We can always count on Abbott Elementary‘s Janine to be relentlessly upbeat, but Quinta Brunson let a hint of sadness and self-doubt creep into her character’s sunny disposition in this week’s Season 2 premiere. Janine was excited to start a new school year, but a recent breakup and money problems loomed over her preparations, with Brunson burying Janine’s worries under a plastered-on smile. She melted down, though, when her car got booted for unpaid tickets, and Brunson spilled out all of Janine’s anxieties in an emotional confession to her friends at school. Brunson still brought the funny — Janine makes an ideal straight man for all of Abbott‘s crazies — but she also added a newfound vulnerability to Janine… and we were happy to learn all about it. 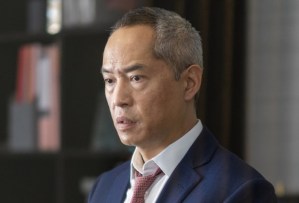 HONORABLE MENTION | On Industry, Ken Leung excels as a high-strung manager whose intolerance for BS fuels the show’s anxieties. In the Season 2 finale, he delivered that and more, as Eric pitched his small team with unwavering bravado and a hunger for opportunity. But when Harper confessed that she may have shared some insider information with a client, the actor’s demeanor turned serious, showcasing his character’s ability to maneuver around the toughest of hurdles. Later, as Eric and Harper blackmailed their way into creating a new division, Leung fired on all cylinders, spitting out devious dialogue with aplomb. He pivoted once again, evoking a softness that caught us off guard as we approached that final shocker. Eric may be a savage in the finance world, but his effectiveness is all thanks to Leung’s many talents.

Which performance(s) knocked your socks off this week? Tell us in Comments!

New US rocket systems will enable Ukraine to hit targets 50 miles away — its greatest range yet, US administration officials say

Adélie penguins show signs of self-awareness on the mirror test

When shown their reflection, wild Adélie penguins can tell it...

Here are the Best Books of 2022, According to Buzzfeed

December 6th’s Wordle answer might not be the easiest to...

Trauma changes people's lives. It becomes an invisible force that...

9 Myths About Coffee We Continue To Believe In

Coffee has always been more than just a beverage; in...

The queen of Christmas is here to reclaim her crown....