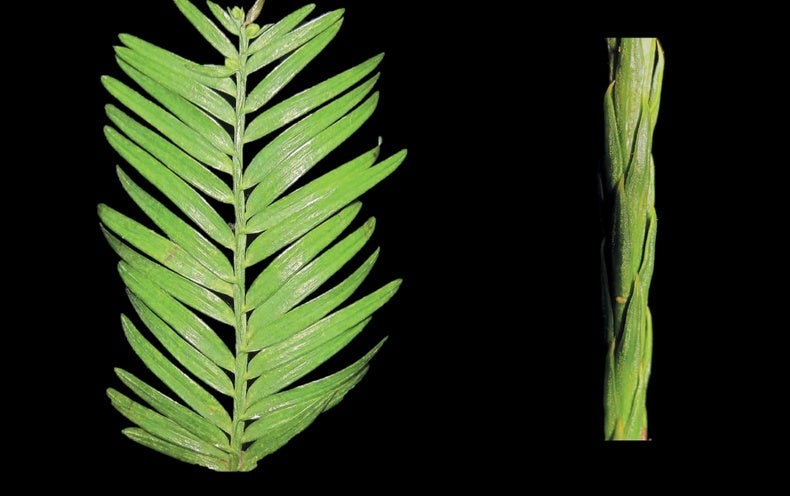 Coastal California’s redwood forests—with their lush ferns, towering trees and damp petrichor scent—might not seem to want for water, but they do face dry summers. To survive them, the trees, Sequoia sempervirens, grow specialized shoots with leaves that scrape moisture from the air.

Many plants (including redwoods) are known to drink through their leaves, but “no one ever really figured out how the water gets in there,” says ecologist Alana Chin, now at ETH Zürich. Exposing leaves to moisture has costs: even a thin film of water can block the flow of carbon dioxide into leaf openings called stomata, hindering photosynthesis.

To see how the trees solve this dilemma, Chin and her colleagues climbed redwoods in various climate zones and snipped twig samples. Back in the laboratory, they generated fog with a humidifier and measured how much water these leafy shoots absorbed. They also examined leaf surfaces and cross sections, then modeled water movement to see which traits affect uptake.

Their analysis, published in the American Journal of Botany, revealed two distinct redwood shoot types. Resembling asparagus stalks with leaves bunched close to the twig, “axial” shoots make up a small portion of the canopy but absorb water at about four times the rate of ordinary-looking “peripheral” shoots. The team estimated a tall redwood absorbs up to 13 gallons of water in the hour after it gets wet. Meanwhile peripheral leaves power photosynthesis with dense stomata and waxy, water-repellent coatings.

The study found that redwoods in drier, southern areas have more axial shoots that are located higher up than on northern trees, which helps the former pull extra water from summer fog and light rain. Other tree species may have similarly specialized shoots; pines, for example, have two types that might be analogous to those on redwoods, Chin says. Such versatility could be important in the context of climate change, notes Wake Forest University ecologist Carter Berry, who was not involved in the study. “In a drier world,” he says, “the ability to subsidize your water source with water from the air becomes more important.”

The Funniest Tweets From Parents This Week

Grumpy / Sunshine Duo Books for Fans of Wednesday and Enid