Our Sun Could Someday Reveal the Surfaces of Alien Earths 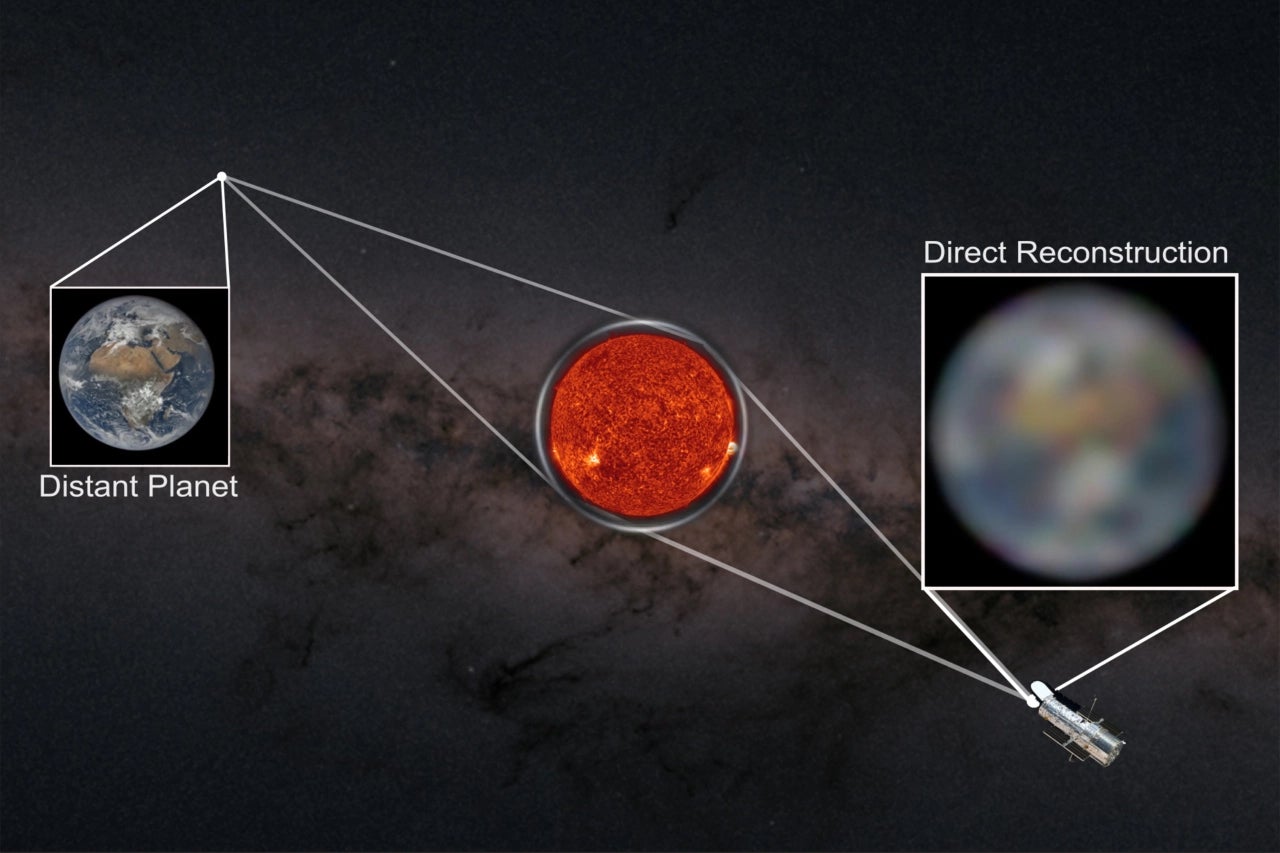 We now know of more than 5,000 exoplanets beyond the solar system. What we really understand about each of these worlds, though, is barely anything at all. Most of them have been seen only indirectly from their shadows as they cross in front of the stars they orbit. The few that researchers have managed to actually take a picture of—that is, to directly image using light emanating from the planets themselves—appear as little more than monochromatic dots even in the very best current telescopes. And so far all of those directly imaged worlds are among the brightest, largest and least Earth-like exoplanets known.

The far future may be a different matter. How detailed could a picture of a distant exoplanet be—especially one that is small and rocky like Earth? The answer is that someday astronomers could obtain images revealing continents, clouds, oceans, ice caps and even vegetation on some remote Earth-like world orbiting an alien star.

The problem is that the most powerful telescope for this task can’t be built—not exactly, anyway. Instead it must be conjured into existence using the tenets of Einstein’s general theory of relativity to transform our sun itself into a star-sized magnifying glass. Albert Einstein’s key insight—that gravity can be understood as the curvature of spacetime—means that stars and other massive objects act as natural “gravitational lenses” that warp and amplify the light from background objects.

Astronomers today routinely use galaxies and galaxy clusters as gravitational lenses, but the prospect of using this technique for our sun poses so many challenges that few researchers have taken it seriously. Most notably, the approach requires precisely positioning a conventional telescope—something like Hubble, for instance—at the point where any given target’s lens-amplified light comes to a focus. For the sun, those focal points are found at the extreme outskirts of the solar system—at least 14 times farther out than Pluto.

Now a new study by astronomers at Stanford University shows that a simplifying shortcut could exist for the still arduous task of imaging exoplanets using our sun as a cosmic telescope. The study, published in the Astrophysical Journal, suggests astronomers could eventually achieve exoplanet imaging with a resolution 1,000 times greater than that of the Event Horizon Telescope, which has been used to capture the historic first images of supermassive black holes. “It’s just neat to think of this as kind of the ultimate end game of the process of studying exoplanets,” says Bruce Macintosh, a Stanford astrophysicist, who co-authored the paper, “or at least the end game short of actually visiting them.”

Alex Madurowicz, Macintosh’s co-author and graduate student, first fed real satellite images of Earth into a computer model that reduced our world to how it might appear if it was seen from afar through a stellar gravitational lens. In most circumstances, the resulting image would be an “Einstein ring”—a distorted, circular smear produced by the planet’s light curving around the lensing star. Earlier work by another researcher, Slava Turyshev of NASA’s Jet Propulsion Laboratory, had shown that correcting those distortions would require methodically moving a light-gathering conventional telescope back and forth within the focal region at the solar system’s edge. The resulting pixel-by-pixel scan of the planet’s warped projection, somehow choreographed from Earth upward of 80 billion kilometers away, could take thousands of hours and consume enormous amounts of fuel.

Madurowicz and Macintosh realized that this harsh calculus could change, however, given that the sun is slightly oblong rather than perfectly spherical. That minor detail means that if the target exoplanet aligns perfectly with the sun’s equator as seen from the focal-region telescope, the product is not an Einstein ring but a “cross”—four asymmetrical copies of the planet around the sun’s perimeter. Madurowicz found that, by exploiting this asymmetry, the scanning process to reconstruct a target exoplanet’s undistorted image could be eliminated. “You don’t have to move [your telescope] around inside the image,” he says. “You can just stay in one spot.”

Turyshev, who was not a part of this latest study, is skeptical that the painstaking process of scanning he first described can actually be eliminated. The idealized technique for image reconstruction that Macintosh and Madurowicz propose, he says, would have to overcome possible interference arising from the brightness of our sun and its seething outer atmosphere, known as the corona. “It would be nice if the sun would just be dark, right?” Turyshev says. But it is not, of course, and even the best equipment could not fully block a fraction of it from trickling into a telescope, especially one staring directly at our star. “Their paper is wonderful, but it’s a theory,” he adds.

Even if the scanning process could be eliminated, there are other limitations to consider as well. Each exoplanet targeted for solar gravitational lensing would likely require its own dedicated Hubble-like space telescope sent to and operated at the solar system’s outer limits. For example, for such an observatory to image a second exoplanet just 10 degrees off from its original target, it would need to shift its position around the sun by more than 14 billion kilometers. “To use a solar gravitational lens, you need to line up the telescope, the sun and the planet extremely precisely,” Madurowicz says. There would be no way for a single telescope to image more than one planet, or one star system with several interesting worlds, at a time.

This limitation is the reason Jean Schneider, an astronomer at the Paris Observatory, has his eye on a different, perhaps more feasible alternative to solar gravitational lensing: the hypertelescope. This broad concept envisions the detection of surface features of exoplanets through the use of space-based fleets of many meter-scale mirrors flying in formation to create virtual telescopes larger than any single one ever could be. Schneider agrees direct images of potential extraterrestrial vegetation would be “precious” and would provide insights unavailable through any other known method of remote observation.

Aki Roberge, an astrophysicist at NASA’s Goddard Space Flight Center, points out that astronomers don’t even know if there is another world like our own out there at all. “Not just ‘Earth-size,’” she says, “but ‘Earth-like,’ with oceans, continents, an atmosphere and a biosphere.” And direct imaging, it seems, is the only way to really find out.

A proposed observatory recommended in the National Academies of Sciences, Engineering, and Medicine’s report Pathways to Discovery in Astronomy and Astrophysics for the 2020s, otherwise known as the Astro2020 Decadal Survey, may offer the best near-term hope of giving Roberge and her peers the answers they need. The survey serves as a once-a-decade roadmap guiding U.S. astronomy. And topping its latest roadmap is a concept for a space telescope with a mirror more than six meters wide, something of a “super Hubble” tuned for gathering optical, infrared and ultraviolet light that is intended for launch as soon as the early 2040s.

According to Astro2020’s recommendations, one of the core capabilities of such a telescope would be directly imaging a diversity of exoplanets with the key objective of studying their atmospheres to make better guesses about their environmental conditions. From there, astronomers might determine if the chemical necessities or by-products of life as we know it— water, organic compounds, free oxygen, and so on—exist on any of the targeted worlds. The fuzzy blobs that might be imaged by this proposed telescope could be the first small step toward truly knowing an exoplanet’s potential to harbor life. Only after such a mission, most astronomers say, could we make the giant leap of building a hypertelescope or exploiting the solar gravitational lens to get detailed surface images. “We have a path to the 2040s. After that, it’s the Wild West,” Roberge says.

Despite the far-out nature of the solar gravitational lens, Turyshev, Macintosh and Madurowicz are of one mind: thinking about its possibilities now is worthwhile. Already, advances in solar sails and other unconventional propulsion technologies offer the possibility of expediting the requisite journey to the solar system’s outermost reaches. The challenges remain daunting, but using our star as the ultimate telescope may be closer to reality than anyone now suspects. By anticipating the theoretical and practical limits of the approach, when—or if—it finally lies within our grasp, the question will not have to be “Can we do this?” but rather “What planets should we image?”

System Of A Down fans “scare the shit out of” Serj Tankian in public by screaming ‘Chop Suey!’ lyrics

Psychedelic therapy: Can you take out the trip and still treat depression?

DC Wants Joker Director To Be A Kevin Feige-Like Advisor