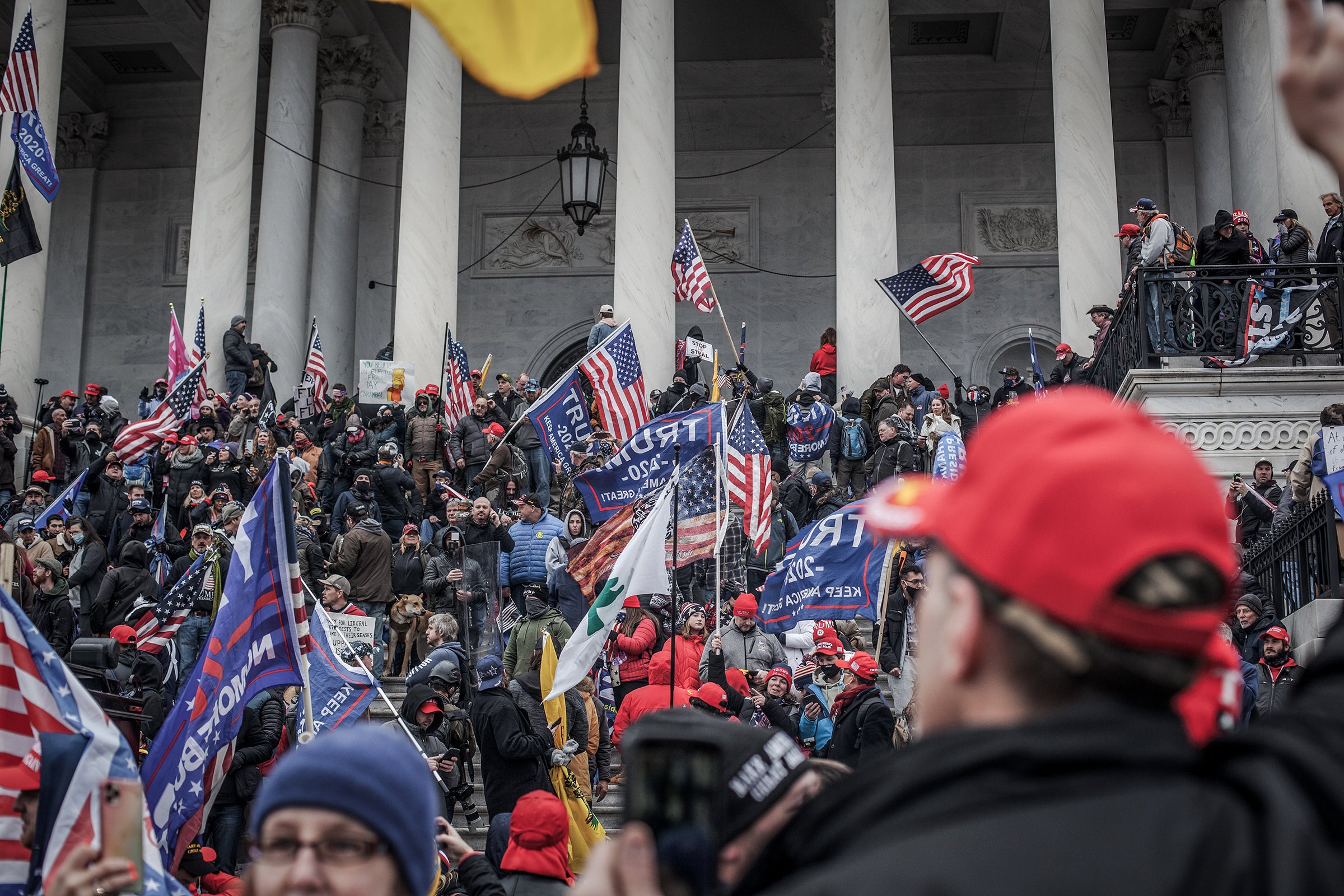 Editor’s Note (6/14/22): The current hearings on the January 6, 2021, insurrection, held by a U.S. House of Representatives committee, have highlighted ties between mainstream supporters of former president Donald Trump and extremist groups in the mob that invaded the Capitol. A week after the January 2021 attack, extremism expert Amy Cooter explained why these connections are growing more dangerous and common.

Growing concerns about violence from some people and groups supporting Donald Trump proved terrifyingly accurate last week as an armed mob bearing Trump banners stormed into the United States Capitol. Its aim was to stop Congress from certifying Joe Biden as the next president of the U.S. Five people died, many more were injured, and members of Congress were forced to hide for safety in what several senators and representatives, as well as many other observers, are calling an attempted coup. People in the U.S. and around the world now want to know more about the motivations and mentality of these insurrectionists and if they will be a long-term presence in our political system.

I have studied right-wing groups, and especially U.S. domestic militias, for more than a decade. Some of those who invaded the Capitol appear to belong to such organizations, as shown by their military vests, camouflage and other equipment that are popular among these bands. Patches and symbols referring to extremist groups such as the Oath Keepers and Three Percenters were also visible. Others involved festooned themselves with Nazi iconography or likely see themselves only as “patriots” or as Trump supporters with no group affiliation. All, it seems safe to say, were there to “Stop the Steal,” a baseless, evidence-free, and repeatedly disproved claim that Biden’s election win was fraudulent. They wanted to maintain Trump’s administration for at least another four years and provoke fear in anyone who supports Biden, the legitimate winner of the November election.

Militias are comprised mostly of white men in their 20s and 30s who own and train with firearms with the goal of being able to defend themselves against a variety of perceived threats. The comparatively few women connected to such groups tend to be involved for two reasons: Some care about the same ideological issues but largely view militia participation as sharing a hobby that their husbands or boyfriends enjoy. A small subset of women, however, take their membership incredibly seriously—almost fervently—and have visible leadership roles.

I prefer to describe militias as part of a broader network of “nostalgic groups” rather than “right-wing” because I believe what is more important for understanding their collective motivations is their idealization of the past. The precise ideal they have in mind varies somewhat across organizations under this umbrella. Yet all of them have in common the notion that the best version of the U.S. existed in the past, that it has already been lost and that it is the group members’ personal responsibility to fight further loss or even attempt to return society to that former, ideal state.

I have conducted one-on-one interviews with militia members and an extensive, three-year period of fieldwork with these groups across the state of Michigan, where I attended private meetings, trainings and other events they held. My goal was to understand why people become members of militias and to understand the worldview groups like this both attract and promote. (Most scholars who study militias rely on media reports or on the groups’ online materials as their data sources. This approach gives us a window into certain aspects of these organizations, but it is limited because it examines only their public presentations.)

When I ask members what they believe has been lost in American society, they usually reference things such as individual responsibility and self-sufficiency—lamenting the idea of a “sissified society,” to quote one of my interviewees. They complain about a country that—from their perspective—is run by a government that is unnecessarily bloated in size and wastes tax dollars by giving too many people things that they should be working harder to earn for themselves. Many of these individuals state they long for “a simpler time” in our past where, they say, men took care of their families and did not have to rely on that government.

It is impossible to ignore how that supposedly simpler time reflects a point in history where white men held much more power, relative to other demographic groups, than they do today. Women had less financial security, and women and all people of color had substantially less political power and presence. Speaker of the House Nancy Pelosi’s office was a special target for incursion last week, and that fits with the militia mindset. Pelosi represents not only the opposition party but also a strong and outspoken woman, unafraid to challenge Trump’s leadership and the nostalgic, brash masculinity he represents.

Most militia members I encountered were not overtly racist, and few were overtly sexist. But almost none of them recognized how their ideal society would nullify the gains that those other demographic groups have made in recent decades. Instead nostalgic group members focus on ideas of security and stability.

In their vision of the ideal past, America and its citizens are largely safe, with historical enemies such as Russia or China both far away and easily managed by a powerful U.S. military. Importantly, these group members say the one legitimate function of federal government is to ensure citizens’ safety with a strong army and secure borders. These people feel that today they are much more immediately threatened on a variety of fronts, both with economic instability and more present specters of terrorism within our borders. The latter are represented by fears of “Muslim extremists” and, more recently, “anarchist antifa.” One militia member told me, “Black Lives Matter had some good points.” But he went on to make the false claim that “it has completely been taken over by antifa.” And antifa, he said, “is a communist organization that doesn’t care about racial justice—just anarchy and destroying the American way of life.”

Conspiracy fantasies have long fed into nostalgic group members’ fears about lack of security and threats of terrorism. These have ranged from New World Order conspiracies in earlier decades to 9/11 conspiracies and, in more recent months, QAnon conspiracies that cast Trump as a near-savior from liberals who supposedly promote a variety of evils—including antifa, election fraud and even pedophilia rings. Trump’s tweets and rally speeches have actively exacerbated these notions among those already prone to believe in them.

Based on the early statements of some people who breached the Capitol, it is apparent that many subscribed to the false allegations that fraud prevented Trump from winning the election. Other participants may not have believed there was fraud yet concluded that it was their individual responsibility to try to help Trump maintain power because his vision of the U.S. more closely resembles their own. In that America, they are not just purportedly safer from Democratic leadership but also from what some of them perceive to be excessive or even immoral cultural changes on issues such as LGBTQ rights and visibility, greater voting access for Black Americans or increased accountability for sexual harassment in the workplace. One of the militia members I spoke with told me, “I’m a libertarian. I don’t really care if people are homosexuals, as long as me and my kids don’t have to see it. Keep that behind closed doors like we used to.”

The Capitol assault delayed the certification vote, though it was completed several hours later. But the invasion also signaled that many who subscribe to a nostalgic vision of the past are not ready to move on to a Biden administration. It is unfortunately likely that we will continue to see violent efforts to disrupt that administration in the next four years, because many of these people see cultural changes that advance the interests of other demographic groups as a threat to their own liberty.

Is Untapped Market Attractive to Hollywood After Bans? – The Hollywood Reporter

The Many Possible Futures of Streaming Television

The Many Possible Futures of Streaming Television

AOC Responds To Capitol Video: It's Clear 'I Work With People Who Wish Me Harm'

How To Complete The Making Music Quest