How Parachute Frogs Took to the Sky 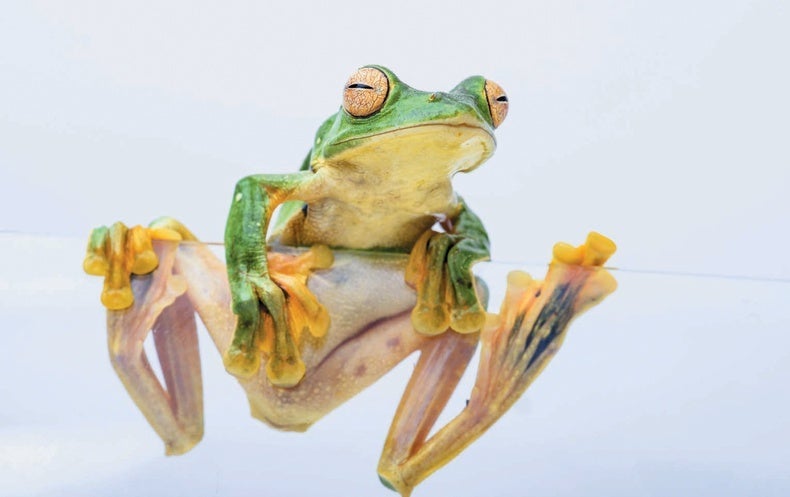 A few frog species in the jungles of East Asia take hopping to the extreme. These daredevil amphibians, dubbed parachute frogs, leap from treetops and soar through the rain-forest canopy to evade predators. Some can cover more than 50 feet in a single glide.

Although they lack the true wings of birds and bats, these frogs use extensive webbing between their toes as a winglike surface to slow their descent. They also have oversized feet, as well as flaps of loose skin along their limbs and sticky toe pads to help them safely land.

The researchers compiled the tree frog’s genome and compared it with a closely related frog incapable of gliding. For a study in the Proceedings of the National Academy of Sciences USA, they pinpointed 455 modified genes. “Many of the genes we identified are associated with various aspects of webbing, foot and limb development,” Hillis says. “All are consistent with the strong morphological adaptation of flying frogs for gliding behavior.” The researchers found some genes produced longer limbs and stickier toe pads for climbing. They also identified the network of genes likely responsible for extra webbing by tracking foot development in each species’ tadpoles.

To observe these differences in action, the researchers conducted a controlled flight test. They placed frogs from each species on perches and recorded any jumps and subsequent glides—positioning soft sponges below in case frogs fared badly in the air. This proved important for the nongliding frogs, which plummeted into the sponges. But the parachute frogs splayed their heavily webbed toes to glide horizontally before touching down.

The researchers say understanding these frogs’ adaptations may help illuminate how other animals—such as flying squirrels and flying lizards—took to the sky. Koehl and her colleagues have even used flying frogs to help model dinosaur flight. Flying dinosaurs “had feathered tails and feathers on their hind legs,” she says. “They had the same maneuverable body design as flying frogs.”

The Censorship of Library Pride Displays

‘Jack in the Box’ Review: j-hope Embraces the Darkness