TRIALS OF FIRE AND REBIRTH 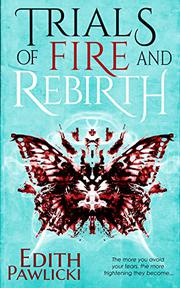 Three thousand years ago, in a region called Zhongtu,An Ning awakes in a field of ash, inhabiting a man’s body. She has no other memories of her identity prior to waking other than her name and gender, but she has the magical power to shape clothing from soot. She learns that the village of Xiling has been burned by the God of Destruction and befriends Lady Guiying, a courtesan. When An Ning explains the circumstances of her awakening, Guiying declares her a new god. Soon, An Ning is known as “the Peace Bringer” in the village of Ningjingcun. One day, Karana—who’s the God of Destruction but chooses not to use the title—approaches the village. When he sees someone who reminds him of An Ning, whom he knew millennia ago, he calls her name. Startled, An Ning uses divine magic to teleport to Karana’s side, then faints from the exertion. Karana carries An Ning to her house and remains until she wakes. So begins an unconventional and magical romance that feels like destiny at work—yet Karana keeps his past from An Ning, including her role in it. The truth emerges as the Sundered Cult, seeking vengeance for their deceased Sun God, attacks female monks and deities. Pawlicki’s third series installment is emotionally resonant as both a fantasy and as an exploration of transgender identity. The chapters often shift between An Ning and Karana’s third-person perspectives, and when following An Ning’s actions, the narration uses the pronouns she/her/hers. When following Karana’s, An Ning’s pronouns become he/him/his, portraying Karana’s inaccurate perception. Magical elements, such as Bulgae fire dogs, are well integrated into the narrative. Bits of wisdom weave through the story in lines such as “You cannot control what another believes.” The work’s tragic portrayals of body dysmorphia will be familiar to many readers and may create clarity for others. A magical plot development toward the end reveals how one’s viewpoint on gender is informed by society and also changeable with an open heart.

How Taika Waititi Convinced Natalie Portman To Return For Thor 4

Streaming Is Too Big for Its Own Good

Streaming Is Too Big for Its Own Good

35 last-minute Father's Day gift ideas 2022: Gifts for the best dad in the world

Mexican President Tells Mexicans in Texas Not to Vote for ‘Anti-Immigrant’ and ‘Immoral’ Gov. Abbott