THINGS TO COME AND GO 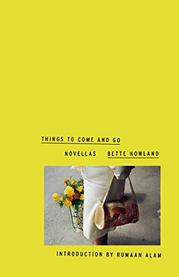 In recent years, A Public Space Books has reintroduced the works of the undeservedly overlooked Howland (1937-2017), publishing a collection of her stories, Calm Sea and Prosperous Voyage, and W-3, a 1974 memoir of her time in a psychiatric hospital after a suicide attempt. Now the imprint has republished, with a new introduction by author Rumaan Alam, this slim volume of three novellas, which Howland originally released in 1983—the year before she won a MacArthur Fellowship and then, presumably overcome by the pressure of heightened expectations, stopped publishing. This is another unburied treasure, with Howland’s glimmering talent again on full display. Each story showcases the author’s intelligence, insightfulness, and incomparable eye for illuminating detail and ear for captivating dialogue as well as her ability to evoke a specific place and time (often gritty midcentury Chicago and its environs) and the emotional complexities of close relationships (family and otherwise). In Birds of a Feather, Howland’s young female narrator quietly comes of age amid the cacophony and oblique warmth of her father’s loud Jewish family, “the big brassy yak-yakking Abarbanels.” The Old Wheeze focuses on the events of a single snowy Chicago night following a divorced young mother’s date with an admired older man and captures the differing perspectives of the mother, her elderly babysitter, her nursery-school-age son, and her lover. In the third and final novella, The Life You Gave Me, a daughter reckons with her complicated relationship with her father as she is summoned to the hospital to visit him on two separate occasions. “My father’s size and strength were more than physical. Mental, temperamental. Character traits. Mind Over Matter was his motto….To see him brought down, laid low, damaged, hurting, like any other injured creature—was to see him disgraced,” Howland writes. “All of which is not to say that my father was ever a simple man. Only that he didn’t know his own strength. But I did.” Howland, too, may not have understood the strength of her own writing. But now, thanks to the reissuing of these and other stories, we do.

DNA mystery may be crystal clear

DNA mystery may be crystal clear

The Sadness of Kevin Samuels' Life and Death

WHO IS WELLNESS FOR? | Kirkus Reviews

The Shining Theory Suggests Jack Torrance Had The Shine

Brett Returns to Dance With Casey — and Help Violet? (PHOTOS)