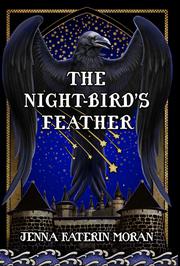 The Sosunovs are humans who settled in an “isolated, demon-haunted otherland” long ago. They’ve developed such skills as lucid and shared dreaming as well as spiritual combat. This novel, broken into chronological stories, mostly centers on one member of the Sosunov family: Valentina Grigorievna. When she’s a young girl, a heron-witch goes after her family in a fishing village named Fortitude. This heron-witch, striking in dreams, renders comatose all of Valentina’s 15 family members. The girl, along with the never-ending job of caring for the household and the incapacitated Sosunovs, must defeat the heron-witch before she devours her loved ones. As years pass, the eternally youthful Valentina runs into her share of villains, from vampires to the Headmaster (aka the lord of Death’s dominion) at neighboring Bleak Academy. Vampires, in particular, become a constant presence, flocking to the sunless otherland and establishing Night London. Some of the book’s tales spotlight other characters (though Valentina pops up in each one). There’s Mrs. Senko, a Bleak Academy teacher who’s bizarrely fascinated by a creature living in her gardens. Elsewhere, Evdeniya Kinjirovna Kaneko needs help when her scientist/engineer parents disappear after building the humming, greenish-glowing “thing that should not be.” Meanwhile, the Headmaster shows Valentina a dreadful vision of a “cursed land…hopeless, lifeless, cold, and grey”—a broken, terrifying world whose “substance” may seep into other places or into people’s souls. It’s hardly surprising that Valentina sets her sights on the wicked Headmaster and his powerful sorcery.

Moran’s meticulous worldbuilding gives this deliberately paced tale a distinctive style. Although specifics on characters’ surroundings are minimal, the abstract details sometimes come across as gleefully ominous. For example, the “geographically disconnected” otherland, aside from designated places like Fortitude and Bleak Academy, teems with areas collectively called “the Outside.” The Outside is nothingness and chaos, and it’s divided into even more unnerving parts—the low, the near, the far, and the deep. In addition, dialogue exchanges, rather than action, constitute much of the story, whether characters converse in a dream or casually discuss murdering one another. “I still think about killing you sometimes,” Valentina tells one player matter-of-factly. Still, the remarkable Sosunovs lead a sublime cast. Their time-defying abilities allow Valentina to dream-meet her whip-smart multi-great-granddaughter Aprosinya. This relative, who appears throughout the novel in and out of dreams, gets a visit from her mother when she’s pregnant with Aprosinya. Moran further enhances this story with memorable imagery. The heron-witch, in the waking world, crawls through a window more like a worm than a bird, and Valentina uses a magical knife to turn a skeleton into a flesh-and-blood comrade with not-quite-human eyes. In the same vein, Moyer and Bilibin’s pristine artworks open each chapter, showing such details as the Headmaster’s shockingly eerie star-scape eyes and a lovable, swimming seal. As the story progresses, the characters and plot evolve. Valentina starts her own family, and the Industrial Revolution, for better or worse, makes its way to the otherland. The open ending works wonderfully, whether or not the author has a series in mind.

Long lines of traffic seen at some of Russia's land borders