THE CEDARVILLE SHOP AND THE WHEELBARROW SWAP 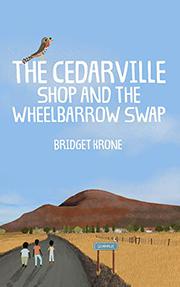 Boipelo is a 12-year-old African boy who lives with his grandmother and father in Cedarville, located in the Eastern Cape in South Africa. Food is scarce, unemployment is rampant, and often the family’s only source of income is Boipelo’s grandmother’s monthly pension from the social security office. But one day Boipelo reads a magazine article about a man in Montreal who traded a red paper clip for a pen shaped like a fish—a move that led to many more trades, including, eventually, a house. Inspired, Boipelo enlists the help of his best friend, Posto, to attempt trading, and though they begin with just a simple clay cow, the trades make a real impact on the community. A newspaper article about the trades leads to fame for Boipelo, but the journalist omits Posto’s role, and the boys’ friendship frays. In this humorous, optimistic tale, Krone explores the mutability of friendships and the perils of trying to hold on to them too strongly. Background information from the author discusses the effect the post-apartheid reconstruction period had on poor South African communities like Boipelo’s. A YouTube link is provided so that readers can hear the isiXhosa language being spoken.

More than 1 in 7 people worldwide have had Lyme disease

More than 1 in 7 people worldwide have had Lyme disease

White House press secy laughs off question about Biden's health: 'Not a question we should be asking'

Read Our Honest Review of Jenny Bird Jewelry With Photos

The Great Pacific Garbage Patch is packed with floating life