O SAY CAN YOU HEAR? 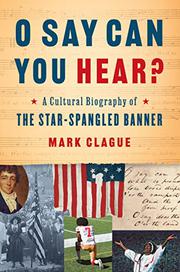 A music historian and professor of musicology, Clague finds in America’s national anthem “a surprisingly rich archive offering insight into the conflicts and complexities that forged the United States.” Written by Key in 1814 after he witnessed America’s triumph over the British in Baltimore’s harbor, the lyrics appeared under the title “Defence of Fort McHenry” and were quickly reprinted in at least 37 newspapers, “riding and reinforcing a wave of patriotic optimism.” Contrary to the myth that Key penned his verses quickly on scrap paper, Clague finds that he composed them over “at least sixty hours,” shaping the words to fit a familiar melody that had been composed by John Stafford Smith for the Anacreontic Society, an 18th-century London social club. Acclaimed from the start, the anthem became increasingly popular in the North during the Civil War as an expression of “strength, resolve, and unity.” In the South, many wrote parodies of the song. Since 1851, more than 100 translations (including by First Nations) have been published in more than 40 languages. Although Congress ratified the piece as the nation’s official anthem only in 1931, its status by then had been “long enjoyed in civil ritual.” Because the complete version extols freedom and refers to both freemen and enslaved people, the anthem has elicited “conflicted feelings in the Black community” and provoked controversy about whether it offers “an inclusive vision of American identity.” Clague provides an informative elucidation of the anthem’s language for 19th-century listeners while conceding that Key—and his listeners—shared an assumption of White supremacy. Though Key represented Blacks who sued for their freedom, he also owned slaves, and although he believed slavery was morally wrong, “nothing he said or wrote that survives in the historical record suggests that he believed Blacks could ever be equal to whites.”

The average US gasoline price fell 19 cents over the past 2 weeks. It could drop another 10-20 cents, an industry expert says

THE MAN BURNED BY WINTER