EUROPE ON THE PATH TO SELF-DESTRUCTION 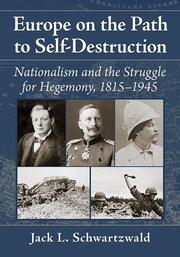 With the defeat of Napoleon I in the early 19th century, Europe had some restructuring to do. It was the goal of figures like the Austrian foreign minister and later Chancellor Klemens Wenzel von Metternich to “restore the old order and render it immune to a repetition of the turmoil so recently extinguished.” Of course, the turmoil was far from over and would reverberate during the next hundred-plus years. From 1815 to 1945 the great minds, leaders, and armies of Europe were hardly idle. The years covered saw fights for suffrage, exploration of the poles, and colonial disputes in Africa. Major conflicts ranged from the Crimean War to the Bolshevik Revolution to the Ottoman Revolution. This was also the time of the music of Claude Debussy, the artwork of Paul Cézanne, and scientific advancements such as Louis Pasteur’s germ theory. Many of the 20th-century portions of the book, however, involve World War I and World War II. Throughout it all, Schwartzwald paints an interconnected, bloody, and often uncomfortable portrait of how the Europe of the late 20th century emerged amid a welter of national conflicts, some of which continue to affect political debates. The emergence of a new Europe was far from a simple process. This broad survey from the author of The Rise of the Nation-State in Europe(2017) naturally covers a lot of ground, and some questions might have benefited from a more thorough explanation than it offers. How, for example, were the numbers of casualties recorded during different conflicts? How is it known that 1,000 (or perhaps 10,000) people were killed in an 1848 uprising in Paris? What exactly made William Osler’s Principles and Practice of Medicine“the standard medical textbook for decades”? Nevertheless, the overall timeline allows for a reasonable understanding of what happened and why. All told, the reader gets an edifying history even if some details fall by the wayside.

Could ‘NCIS’ or ‘NCIS: Los Angeles’ End Next Season?

The Geological Fluke That’s Protecting Sea Life in the Galapagos

This story originally appeared in Hakai Magazine and is part...

Strong women, dysfunctional families and a sentient car at the...

Warwick Davis knows an epic story when he sees one....

How to Style a Beanie

Bootlegs have been a rock fan practice for decades, but...