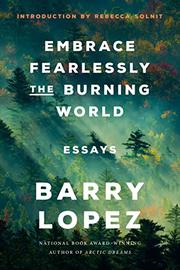 “Witness, not achievement, is what I was after.” So writes Lopez (1945-2020), the indefatigable world traveler. He sought witness, to be sure: Many of the essays and articles gathered here, first published in such venues as Orion and Granta, center on exploring landscapes and the animals and people within them. “I would bring my binoculars, find a place out of the wind, and pick over the land, acre by acre, watching for movement,” writes the author. The title of the book is suggestive of his concerns for a world being devoured by its human inhabitants. As he scanned the acres, Lopez was collecting images of and data on coal-fired power plants in the American West, linking anthropogenic destruction to natural beauty in order to raise big questions: “Why did you not prepare?” he imagines future generations asking the ancestors of today. “Why were you so profligate while we still had a chance? Where was your wisdom?” The wisdom Lopez sought, recorded here, was often that of Indigenous elders, whether in the Australian Outback, the Arctic, or the South African veldt. That wisdom, writes the author, so often comes in surprising forms, as when an Inuit elder describes how a young hunter learns to appreciate the ethical implications of taking an animal’s life by invoking psychologist Abraham Maslow’s hierarchy of needs. Well aware of his impending death to a cancer undetected until it was too late, Lopez gets deeply personal, writing with clear eyes of that death as well as of the horrific experience of sexual abuse as a child. Altogether, the pieces are honest and searching, engaging readers in the largest of questions: How do we live in the world? How do we see it? How do we protect it? The book features an introduction by Rebecca Solnit.

Red salamander found in Panamanian forest is a new species

Red salamander found in Panamanian forest is a new species

Minority Voters Flocking To The Republican Party In Record Numbers

A VISION IN SMOKE | Kirkus Reviews